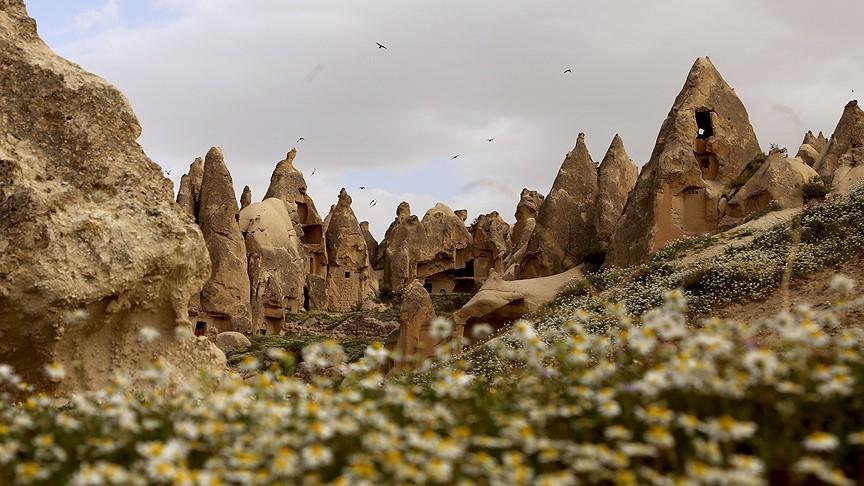 The Geography and History

It is a unique natural phenomenon that started about 12 million years ago… Landscapes, formed over many years… Then the traces of people that give the region its identity…

According to geological research Cappadocia was covered with lakes about 12 million years ago. At that time, geological movements were very active, and the life forms known today had not yet completed their evolution. During this period, the volcanoes that formed the identity of the region came into the scene and an intense volcanic activity has began. The lava from the volcanic mountains spread over a large part of the region, filled the lakes and began to cool. The lava coming out of these volcanic mountains called ignimbrite took the form of tuff that formed the geography of the region over time.

The temperature difference between day and night, rain, wind gave special shape to the tuff rocks. This natural event has created rocks that are hard to find in the world, which are called fairy chimneys. Human traces in the region were seen with the discovery of obsidian, which is a very precious stone, and the beginning of being used as a living space by carving rocks that are easy to carve

There are many factors that make Cappadocia very popular in world tourism. Primarily, fairy chimneys that are rarely seen all around the world, deep canyons, traces of several civilizations and hospitable peoples are the perfect matched in Cappadocia.  Human traces that started from prehistoric times have come to the present day without interruption. Hittites, Assyrians, Phrygians, Romans, Byzantines, Seljuks and Ottomans. There are traces of all world civilizations in Cappadocia.

The Tourism of the Cappadocia

Cappadocia, which preserves very well its own cultural heritage from the past, has been the first choice of history, culture and nature lovers all time. For this reason tourism activities has began many years ago in the Cappadocia. Tourism activities started especially for nature and cultural based activities. However, about 30 years ago Hot Air Balloon flights started in this region. With the increasing interest in hot air balloons, which were very rare in the early days, it has become a very popular activity today. Nowadays, social media has a great effect on this increase of interest.

The Most Famous Activities in the Cappadocia

The flight principle of Hot Air Balloons, in simple terms, is the rise of the heated air and a decrease in its density compared to its environment. You could see many different color and different size hot air balloon in Cappadocia. When we look at the number of balloons and flights we could say Cappadocia is the capitol city of the Hot Air Ballooning as well. Because you cannot see in the same time 155 balloons on the sky almost every day. Almost 250 days you have a chance to fly over Cappadocia with Hot Air Balloon. All conditions have come together for the magnificent coexistence of hot air balloons and Cappadocia. Balloons can fly between half an hour before sunrise and half an hour after sunset when the good weather conditions are provided. The passenger capacity of the balloons starts from 2 people and this number can go up to 28 people.

Imagine there are balloons for 28 people!

In addition to hot air balloons, there are also Jeep Safari, ATV Quad bike tours, horseback ride, Traditional Turkish Night and magnificent valley trekking tours in the region. In brief, you could find all kind of excursion and activities whenever you wish during the day.

Far Eastern guests are more interested in tours such as ATV Quad Bike and Jeep Safari. European guests usually attend trekking and cultural excursions. However, no one in the world can say no to the Hot Air Balloon tour in Cappadocia.

Tourism starts with magnificent Hot Air Balloons in the first light of the morning and continues with different activities all day in Cappadocia. Cappadocia is a city of culture, nature and activity that lives with local and people from all around the world.