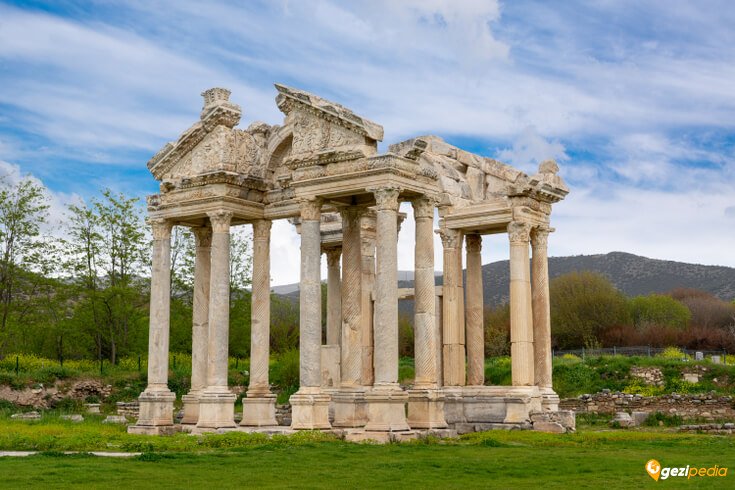 Culture is an endless treasure. The oldest civilizations in history lived in Anatolia. Are you interested in historical artifacts and nature? This tour is for you.

We arrive at Izmir, met with a friendly “merhaba” (hello) and escorted to hotel.

In the morning, explore Ephesus, one of the most complete cities of antiquity. Ephesus reached its peak as capital of the Roman Province of Asia, making it one of the five largest cities in the Roman Empire. Stroll the 2,000 year old marble streets past reminders of its grand past such as the Library of Celsius, Roman villas and the theater where St. Paul Preached. A short distance away you will visit the home of the Virgin Mary and make a photo stop near the unique column left from the Temple of Artemis which used to be one of "Seven Wonders of the World" St. John’s Basilica and the village of Sirince.

Your Greco-Roman journey continues with a visit to the ancient city of Aphrodisias, dedicated to the goddess of love. A center of the arts, Aphrodisias was known through the ancient world for its school of sculpture. Sit in the largest stadium of antiquity and view the outstanding collection of ancient statues in the local museum. Proceed to Hierapolis where you will discover the most important necropolis of the Roman Era. Enjoy the beauty of nearby Pamukkale, famed for the healing powers of the mineral water that filled the immense tiers of white limestone in ancient times, which still cascade down the hillside.

Cross Taurus Mountains to reach the Mediterranean and visit the Roman theater in Aspendos, one of the best-preserved ancient theatres in the world, which is still in use today. Return to Antalya and see treasures, which range from the Paleolithic age to artifacts from the last century in the Archeology Museum. The rest of your day is free to enjoy the “Old Harbor” at your leisure.

Driving west along the scenic Mediterranean coastline, you’ll stop to visit Phaselis’ Roman ruins and Demre, known in ancient times as Myra. It was here St. Nicholas served as bishop during the 4th century. Surrounded by Lycian tombs carved into the hillside and a vast Roman theater built directly into a sheer cliff. In the afternoon explore Kekova Bay on a relaxing boat trip.

In the morning, explore the ancient ruins of Perge. Stroll through the ancient agora and sit in the stadium that once echoed with the roar of 15,000 spectators. On the way to Cappadocia, you’ll visit the Mevlana Museum in Konya, which is the burial place of Mevlana Celaleddin Rumi, an Islamic mystic and founder in the 13th century of the Mevlevi order of the Whirling Dervishes. Observe the difference in accommodations for travelers in the 13th century during a visit to Sultanhani Caravanserai. Continue to Cappadocia.

Relive the early days of Christianity as you visit the Byzantine churches of Goreme carved into the cliffs and caves with colorful frescoes dating to the 7th century. Learn how the colorful kilims (carpets) that echo the earth tones of the region are made during a demonstration by local weavers. After lunch continue to explore Cappadocia's beauty in the Valley of the Monks, Dervent Valley also called the “Red Valley” and a photo stop near Uchisar where you can take the best shots of this unique region. In the evening, attend a performance of mystic whirling dervishes in a rock carved lounge.

For a bird's eye view of Cappadocia, an optional hot air balloon ride (at additional cost) is available at dawn. After breakfast, take a walk off the beaten path, to discover the best “fairy chimneys”, some undetected rock carved churches and the volcanic nature of the region. Picnic lunch and literally walk in the footsteps of early Christians during a morning visit of the underground city of Ozkonak. Descend beneath the surface of the earth to the underground city with its wine cellars, classrooms and tombs where early Christians, fleeing persecution, lived for months at a time undetected.

Transfer to Kayseri airport for flight to Istanbul. Drive to Topkapi Palace with a visit to the jeweled captivity of its legendary harem. Enjoy a lunch overlooking the same Bosporus view that the Sultans must have enjoyed. Return to your hotel the same way the Sultan must have with a cruise on the Bosporus disembarking on the banks of an old summer palace, your hotel Ciragan Kempinski -- yes, it IS good to be Sultan!

Today is designed to experience and celebrate the universal nature of Turkey's art throughout history from the Christian & Islamic splendor of St. Sophia and The Blue Mosque to the Byzantine Hippodrome to the Palace of Ibrahim Pasha and the Grand Vizir Of Suleyman The Magnificent. Lunch is at the famous Pandelli in The Spice Bazaar with time to stroll through this antique mall. Then, visit the Mosque of Rustem Pasha with its beautiful blue Iznik tiles before strolling through the labyrinth tunnels of the Grand Bazaar for a chance to barter for colorful kilims, jewelery and leather.
From $ 1,795
per Adult
Need help with booking? Send Us A Message