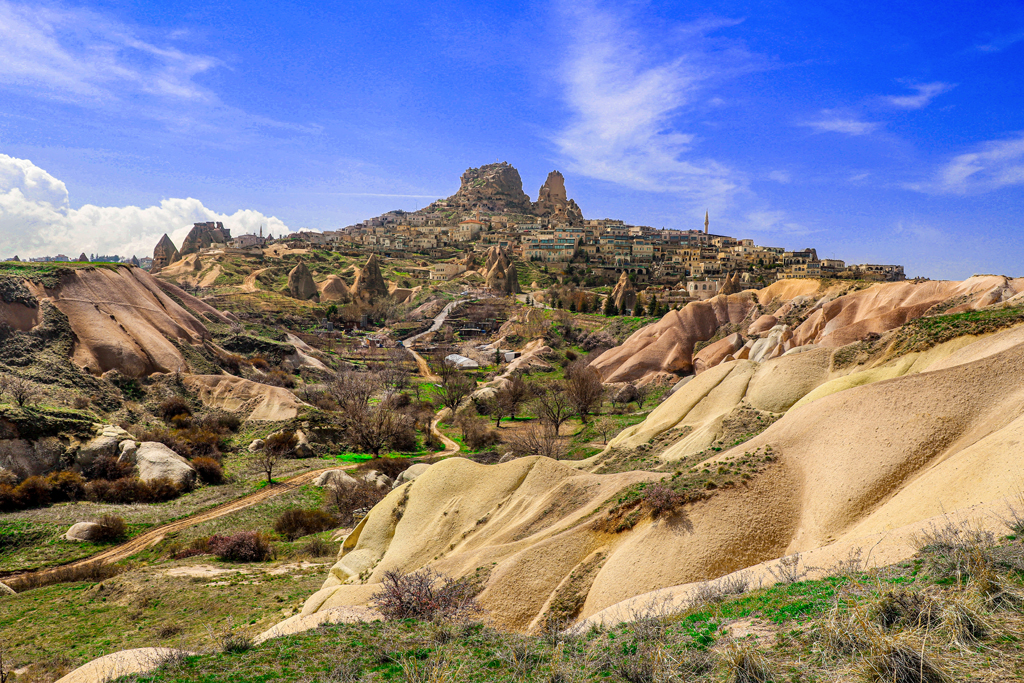 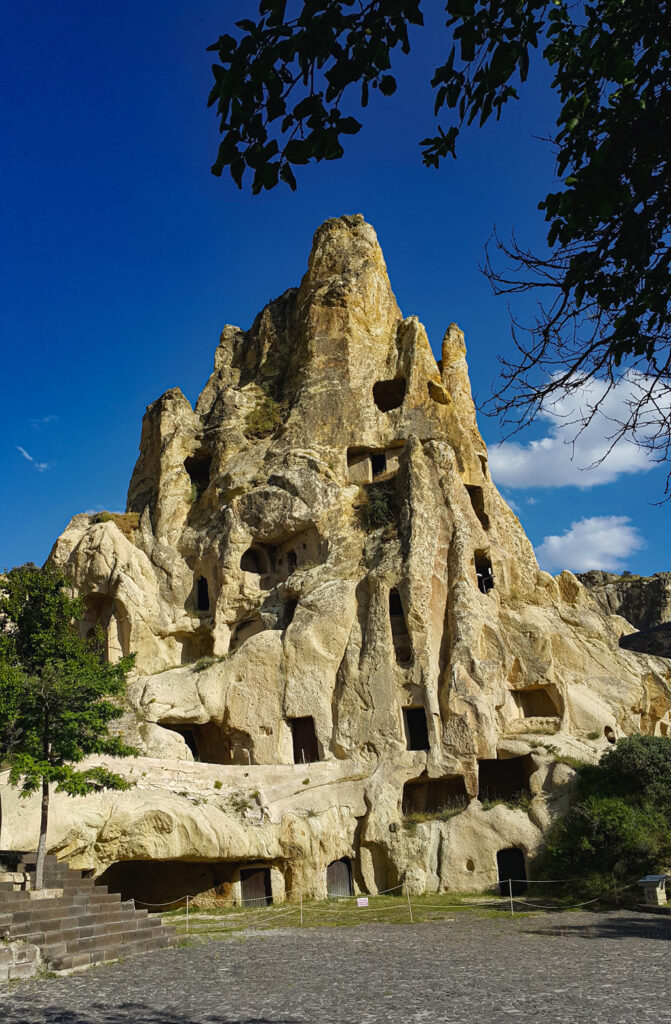 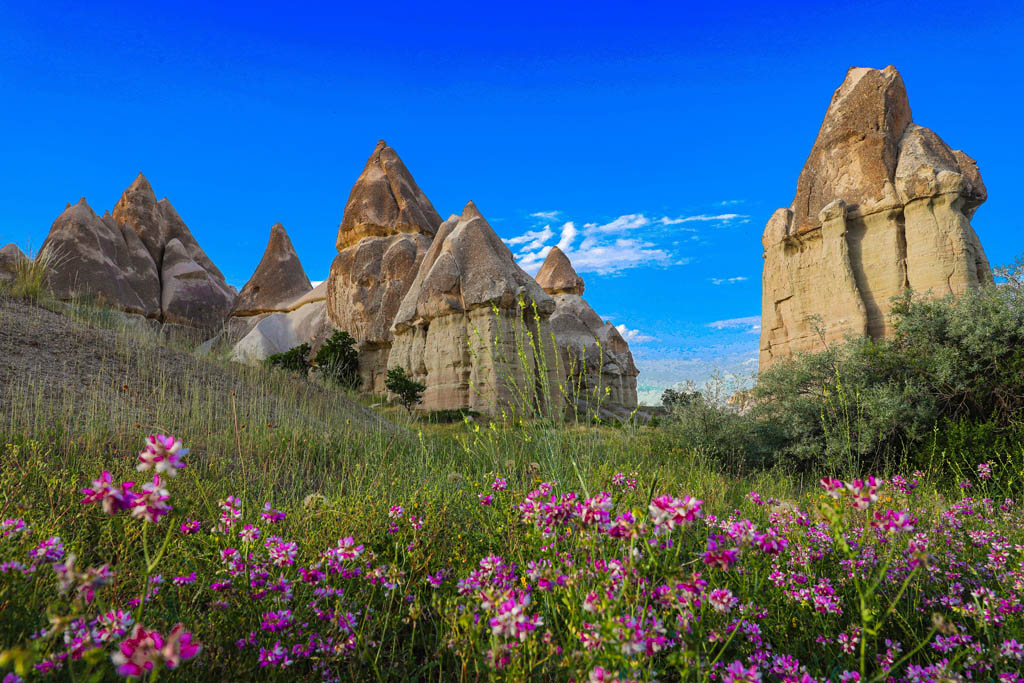 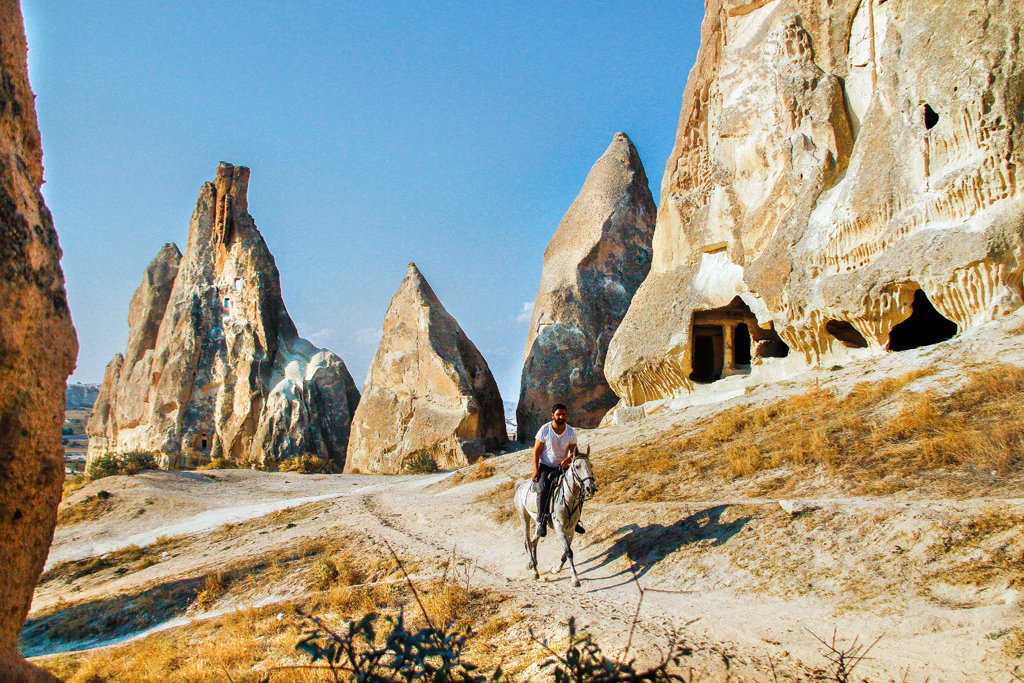 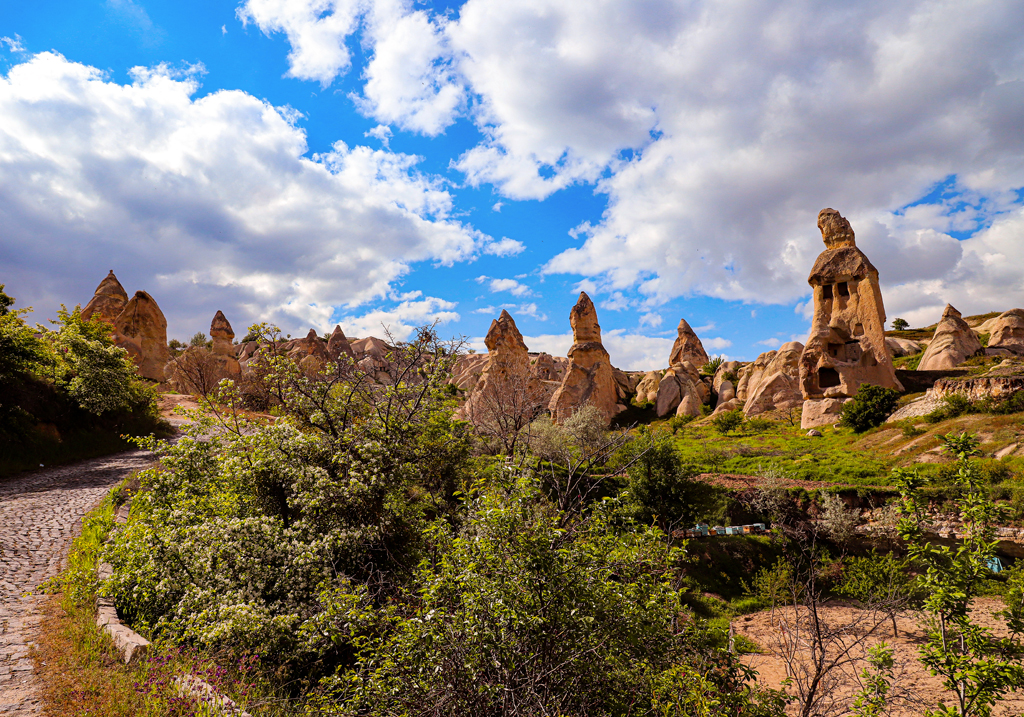 You also know that you will admire Göreme open air museum. Uçhisar castle is a wonderful formation. Fairy chimneys in Paşabağ will fascinate you. You will witness the livelihood of the people in local workshops.

Here is also known as imagination valley as well where you see lots of fair chimneys with interesting shapes like camel rock, mushroom like shapes and more... you can enjoy the valley while walkink through the rock formations. In the valley you also notice the color changing because of different minerals inside. You see derk ones because of copper, red ones with ironoxide and yellow because calcium.

Paşabağları: We call here monks valley too. At the end of 5 th century one of the saints called St.Simeon from Syria came here and lived in a cave in the valley and live as a hermit. Here you find all the fairy chimneys with three caps on them. That s why it s called mushroom rocks. That readlly amazes the visitors and you start thinking how they formed like that with caps on them. Caps of these fairy chimneys are the hardest rocks called basalt so shey still protect the bodies from erosions. And it will be great view when you have a look from up ahead a distance from the valley. 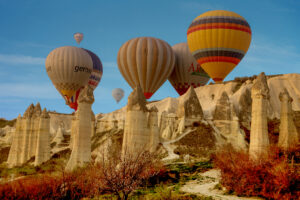 Avanos : We can call here as the heart of art and handicrafts of the area. Here is the small town where the locals make potteries and seramics. This tradition was first started by Hitites 4000 years ago. Red River, Kızılırmak in Turkish, passes from the clay using kick-wheel tecnique. As the time passed,families from the village got used to make potteries and the seramics. Since there is no school to learn this art, the only chance to learn this tradition is go to family workshop. Nowadays there are lost of families working on this. You will be guest in one of these family workshop to see process like pottery marking, coloring and the famous tiles of Turkish seramics. By the way, you can also make your own pottery to see how talented you are...

The names given here in history Korama, Avcılar and still called Maccan by locals. This is the place where you see lots of rock cut churches with best paintings of the area. Here was used as missionary school beginning from 2 nd centuries till 12 th centuries. Then the churches were decorated with breathtaking frescoes and colorful desing.  The unique techniques were used in them like egg white of pigeons as a glaze and all kind of vegetable dyes obteined from the plants and trees. The frescoes helped locals to learn the religion very fast. Then Christianity became the area in a short period. You will be travelling to those ages and imagining the living conditions of them while visiting the caves they lived.

Uçhisar : Here is the small village which is famous with a huge castle used by Chiristians. There were 3 castles like this located in the area. The others are in Ortahisar and Ürgüp. The formations of these 3 castles are very similar to each orher. Allthough the idea is not for sure, it's told all were connected to each orher with tunnels. All were used by Byzantines as castles to defend the cities in the war times. Among them, the highest one is Uçhisar with 100 metres hight. And there is a magnificient panaromic view on top of Uçhisar meaning top castle in Turkish. When you climb up to top of citadel you also have a chance to see all rooms connected with tunnels and stairs. But it's unfortunately impossible to see all of them after the collapse in recent years.

This is the valley called Pigeon Valley because of the Pigeon house on them. Pigeons had different uses in the history. Hittites used for communication,to send messages between the villages. They were also used by Christians to make frescoes in churches as a glaze. It's really interesting that locals still use pigeons to produce fertilizer. They collect their drops to make fertilizers and use them on farms. So you never surprise when you see that many holes made for them everywhere.

Red Tour Attractions: We will pick you up in the morning from your hotel and start our full day Cappadocia tour. Pick up time is between 09:00 and 09:30, depends on your hotel. The tour starts at Uçhisar Castle, 60-meter-high fortress, which was not built, but carved out of natural hill dominating the area. This fortress is the highest point of Göreme region. Here you will make some unbelievable photos of unusual landscape of Cappadocia. After that we will proceed to Göreme, a small town in the center of Cappadocia where we will visit Göreme Open Air Museum. Göreme Museum consists of steep cliffs and many hidden churches dating from Byzantine time. The world’s most important Byzantine cave churches are found in these once remote valleys where monks pursued monastic life from the 3rd century on. Here you can see the best preserved Byzantine cave wall paintings and frescos from the Iconoclastic period until the beginning of the Seljuk rule, which show scenes from the Old and New Testament. After visiting the museum, we will continue to Avanos where we will have our lunch. Avanos is a small town, known for its ceramics and it overlooks the longest river of Turkey, the Red River. Red River; old name Halys; in ancient times was the border between Asia Minor and the rest of Asia. River is the witness of two major events in history that had occurred there. 585 BC the Halys River was the place of famous Battle of Halys; the first battle in history that is known the correct date (May 28 585 BC – Battle of the Eclipse). Two and half centuries after that, during the time of Alexander The Great; Alexander knew and said if he will want to come to the end of the world, he will have to be able to cross the Halys River; and in 333 BC Alexander has succeed in his venture. The most famous historical feature of Avanos, which is still relevant and very visible today, is its production of earthenware pottery. The ceramic trade in this district and its countless pottery factories date back to the Hittites, and the ceramic clay from the red silt of the Red River has always been used. Today, Avanos is the pottery center of Cappadocia and we will visit a pottery atelier and shop. There you will have a chance to watch the potters at work using kick wheels, the technique which has remained unchanged for generations. You will have a possibility to buy yourself a unique handmade souvenir from Cappadocia. After that we will continue to Çavuşin Village, one of the oldest villages in this area. It is an old Greek village and the most important building there is a Byzantine church of St. John the Baptist. Then we will proceed to Paşabağı, also called the Monks Valley because Christian hermits chose to locate hermite cells and churches in three-headed pinnacles symbolic of the Holy Trinity. There you will see some of the most striking cones in Cappadocia with twin and even triple rock caps and they are known as the mushroom-shaped fairy chimneys. Our next stop will be Devrent Valley, also known as „Imagination“ or „Dream Valley“, and it is the most surreal-looking scenery. This valley is famous because of its lunar landscape. Continuing our tour, the route will take us to Ürgüp where we will make a photo break at Three Beauties, the symbol of Cappadocia. There you will enjoy the sun which slowly sets over Cappadocia. Anticipated return to your hotel is approximately betwen 16:00 and 16:30 o'clock. Time: 09:00/09:30 – 16:00/16:30 The tour includes:
From $ 40
per Adult
From $ 40
per Child
Need help with booking? Send Us A Message