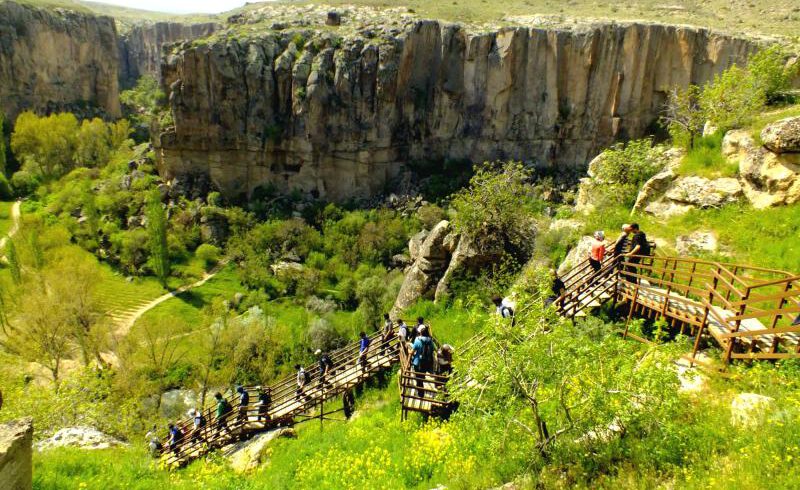 The underground living center will fascinate you. Ihlara valley is the second largest natural formation canyon in the world. While the Melendiz River flows under you, your stomach may not be full.

These are quite old as well.There are almost 36 cities like this.And they were first used by Hittites and later by Christians like a shelter in the war times.They carved lots of rooms all connected with tunnels.So they lived in here when the cities were invaded by enemies.The longest period people used here was 3 months in the war times.Derinkuyu underground cave is the largest one in the area with it's 7 levels and 65 meters depth.You have a chance to see the rooms used as aleeping rooms, storage, rooms, church, kitchen, missionary school... 10.000 people lived here in one time.The air condition chimneys and defence systems used in these caves will surprise you during your visit.

Ihlara Vadisi : This is another famous valley of the area.It's located around underground caves of Derinkuyu.The valley was also formed after the volcanoes erosions then eroded by rain. There is a natural spring water passing through the canyon,so that also helped the valley to form that deep after erosions. The canyon was settled by Christans almost for 500 years between 5 th and 10 th centuries.We have almost 10 churches and so many monasteries in the canyon.So that will be awesome to walk by the river in canyon and to visit the caves there. 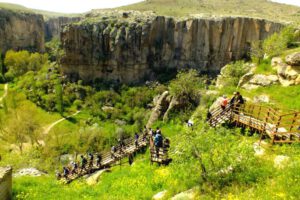 Here has the largest monastery in the region used by Christians. It's also end of Ihlara canyon.There is a big catedral on top of monastery whisch was carved into the rocks as well. They date back to 7 th and 8 th centuries. It was a villageby almost 1000 people at that time. The word Selime was given to this area by Seljuks Selime Sultan and there was made a special tomb for Sultan as well and thats from 13 th century.

It's a small village just located at the end of Ihlara Gorge. This is known as Star Wars movie set as well. It has a magnificient panorama where you have a look at Ihlara Canyon and Selime Monastery too. You will notice here is much higher than the valleys around.It's nearly 200 meters high. These are also nice places that you see locals stil living in cave houses. You will see lots of villagers working on farms, or ladies carrying wood for heating in house, children playing hide and seek in caves.

Agzikarahan Caravanserai were a very important place for the Seljuk rulers of Anatolia to trade. They deveopled the old trade routes,and built Caravansaries along the way to act as shelters and provide protection to traders.
From $ 60
per Adult
Need help with booking? Send Us A Message