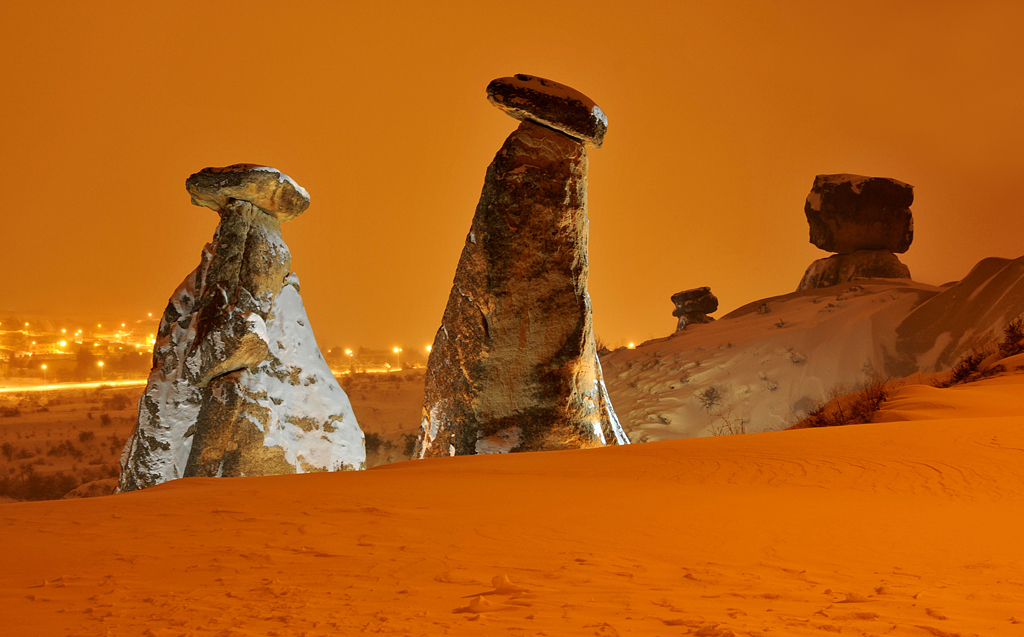 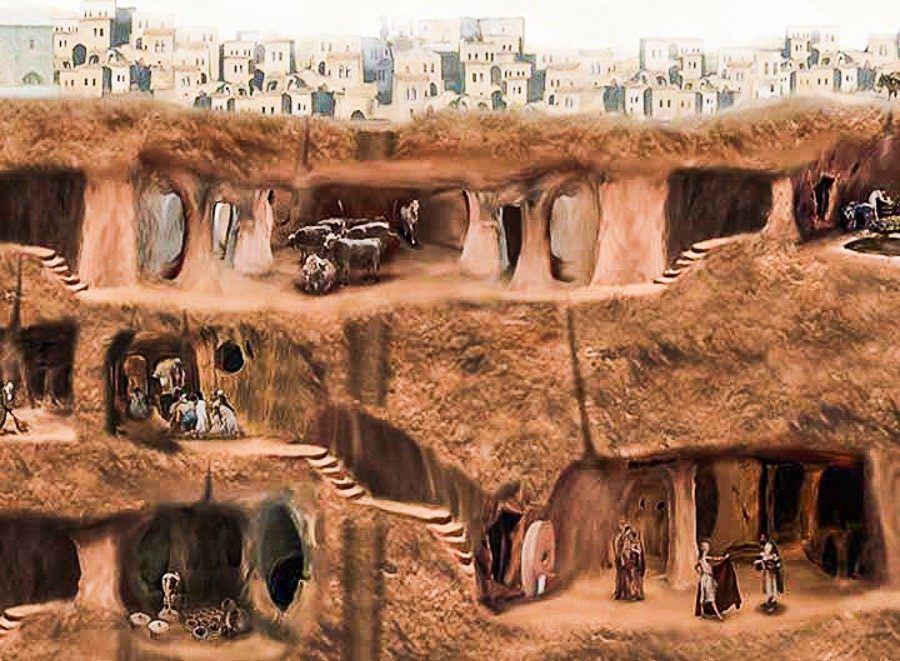 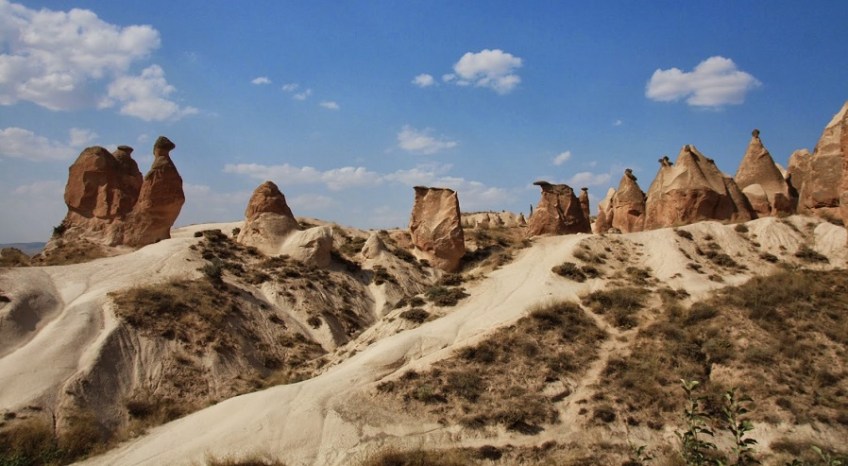 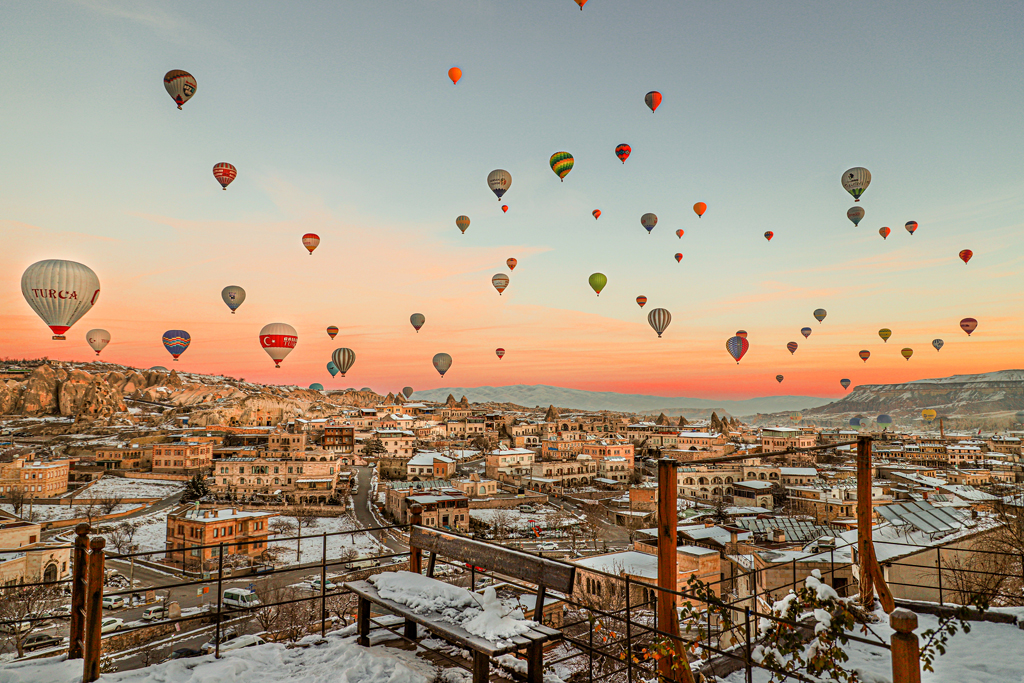 Blue voyage has a very important route for you to understand Cappadocia. It will be a fun tour of Cappadocia without ever getting bored.

Kızılçukur: Here is a valley called Rose valley as well because of the color of the rocks there.This is one ofthe best valleys for hiking in the area.That was also used used by Christians at the end of 5 th centuries,so you will explore the cave dwelling used by them, visiting old churches too.When you have a look from a distance up on a hill,you will notice that the valley has a shape like a finger.So whereever you start hiking you come out from same point.The valleys colors also change up to daylight.Thats why it's the best place to see sunset in the area.

This is a village in the early period of Christians having the oldest church of region dating back to 3rd century. It was exactly settled like a big town where you see lots of cave rooms used as living rooms, sleeping rooms,  kitchens, wineries, etc. So all these are waiting for you to explore them. You have a chance to see oldest church of the area which was dedicated to John the Baptist. When you climbed up to the church, try to look at the view from the window. You will love it. There was a big erosion on that area in 1960's. So unfortunately you cant see the whole settlement. But there are stairs to climb up. So you sont miss this gorgeus view.

Göreme Panaroma: That's the best view you can ever see in the area.You will have a break on a hill called esentepe where you see all the marvellous looking valleys with different shapes and the volcanoes shaped them. It's called. Esentepe in Turkish which means windy point. When you have a visit there, don't forget to tie up something on wishing tree. It's also very common in small cities in Turkey. It's believed that when you make a wish first and then tie up a piece of cloth or something ,your wishes will come true. See if it works...

These are probably the most interesting places to see in the area you shouldnt miss. These are quite old as well. There are almost 36 cities like this. And they were first used by Hittites and later by Christians like a shelter in the war times. They carved lots of rooms all connected with tunnels. So they lived in here when the cities were invaded by enemies. The longest period people used here was 3 months in the war times. Kaymaklı underground cave is the 2 nd largest one in the area with it's 4 levels and 40 meters depth. You have a chance to see the rooms, storange rooms,  church, kitchens... 5000 people lived here in one time. It's hard to believe that many lived here. The air condition chimneys and defence systems used in these caves will surprise you during the visit.

May be that is known as the most famous fairy chimneys of Cappadocia.You here stop to see conical ones with caps on top. There are two big one done small here that is why they are called there beauties by locals. The rocks with caps on top have always an interesting scene cause caps look as if they will fall down but they can't. Cause they are one piece, they are not seperate from body.

It's located almost 1 km far away from Ürgüp town. Here is the fist place in the area used as hospital and health center by Christians.It's located in Hallaç Valley where you see lots of caves connected. These are very old places from 2 nd centuries. But they still have very nice simple geometrical patterns on them and sections where they stored medicines and praying areas. They also made a church called St. Paul. This was dedicated to him because of his journey to Cappadocia to spread the religion.